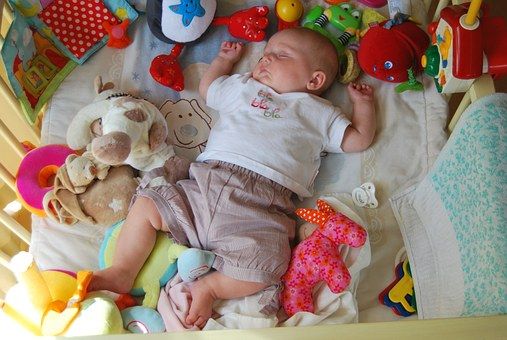 Sudden Infant Death Syndrome is the unexpected and unexplained death of a baby that is younger than 12 months. Usually, the SIDS death will not have a solid cause even after a thorough investigation. Usually, the SIDS death investigation will include a complete autopsy, along with an examination of the death scene, and a review of the clinical history.

Some of the investigators involved include law enforcement personnel, members of the community, as well as healthcare providers. These investigators will examine the baby’s body as they ask relevant questions. Furthermore, they will gather all the necessary information and run the needed tests. If no cause is found, and the baby is younger than 12 months, the coroner/medical examiner will consider it a SIDS death.

How does SIDS happen?

Studies show that a developmental delay in the formation and function of specific nerve in infants’ brains can lead to SIDS. Usually, the serotonin-binding nerve cell pathway is affected. This nerve cell is responsible for the regulation of heart rate, blood pressure responses when the baby awakens from sleep, and breathing patterns.
When there is an abnormal/retarded development of certain critical areas of the brain, it tends to have a negative effect on the functions and connectivity to regions that regulate arousal/physiological stimuli during sleep.
For instance, if a baby is sleeping face down, they will move their face to a position where they can breathe properly. But if the nerve cells that control this arousal are affected, the baby won’t move a muscle, which then leads to SIDS death.

When the baby is overdressed with excessive coverings, or when the air temperature is increased, it can then lead to an increase in the infant’s metabolic rate. The body will focus more on the metabolic functioning, and less on the respiratory functioning. As a result, there will be a loss of breathing control.

If you put the baby to sleep on the stomach, the air movement around the mouth will be affected. Here, the baby will be forced to re-breathe carbon dioxide that they exhale. They will not have enough air/space to breathe in clean oxygen
Other than that, soft beddings and gas-trapping supplies can also affect the normal air movement around the mouse and nose of the baby when they sleep facedown. For that, ensure that you keep soft mattresses, waterbeds, comforters, blankets, or plush/stuffed toys away from the baby.
Above all, ensure that the room is well ventilated and that you keep any smoke fumes away from the little one.

Who Does It Affect?

Even though SIDS deaths are unpredictable, some situations make them more likely to occur. Here is a look at those who are most affected by SIDS.

The age of the infant will determine if they are susceptible to SIDS death or not. Mostly, SIDS is common for infants between one and four months old. All in all, it can happen to any child during their first 12 months.

The baby’s gender is another factor that determines the SIDS susceptibility. According to studies, SIDS is most likely to affect boys. However, the likelihood is very slim.

• The weight of the baby at birth

Another major determinant of SIDS occurrence is the birth weight of the baby. Preemies {premature babies} are the most vulnerable at this point. Basically, babies born very small are more susceptible to SIDS death compared to the full-term babies.

SIDS has been studied to affect babies of specific races more than others. Surprisingly, African-American, Alaskan, and Native American babies are more vulnerable to SIDS deaths. This has been proved by doctors. Unfortunately, the doctors cannot find a reason for this.

This is common in most diseases and health disorders. Children tend to inherit the health disorder history of their family members. In this case, a baby is more likely to die from SIDS if they have a family member {sibling or cousin}, who died from Sudden Infant Death Syndrome. So, if you have anyone in the family that died from SIDS, you should start taking the necessary safety measures early enough.

• The health/age/behavior of the mother

The mom’s health can also affect the SIDS likelihood. Basically, SIDS is most likely to happen to a baby whose mother is younger than 20 years. Also, it can happen if the mother doesn’t get good prenatal care. If the mother uses drugs, smokes, or drinks alcohol when pregnant or during the first 12 months of the baby, it will increase the chances of SIDS to occur.

No, these devices are not designed to prevent SIDS. They only help to better the supervision of the baby while they sleep but are not adult supervision replacements. The baby monitors come in different types, and some help to track the movement and breathing patterns of the baby.
These devices will come with a clip that is hooked to the baby’s diaper or clothing. Also, they can have a sensor that can be placed in the baby’s crib. These baby monitors will not always come with a video camera to watch the baby. They have also not medical devices, hence not approved or regulated by the Food and Drug Administration (FDA).

Furthermore, the American Academy of Pediatrics(AAP)doesn’t endorse these devices. They also warn parents about using the baby monitors to help prevent SIDS. The main reason for discouraging the use of these devices is that some parents can fully replace the safe and effective precautionary measures for the baby monitors.

The baby monitors are expensive because they are high-tech devices that are paired and operated with smartphone apps. The market share of baby monitors is growing, and this is causing concern for the AAP. The AAP concludes that baby monitors are not effective at preventing SIDS.

While the APP might not endorse baby monitors, some of these devices are actually good performers, and they can help to better the baby’s supervision. When choosing one, always ensure that you consider all the necessary features. Basically, go for a unit that has been proven to work effectively at monitoring your baby’s movement and breathing patterns.