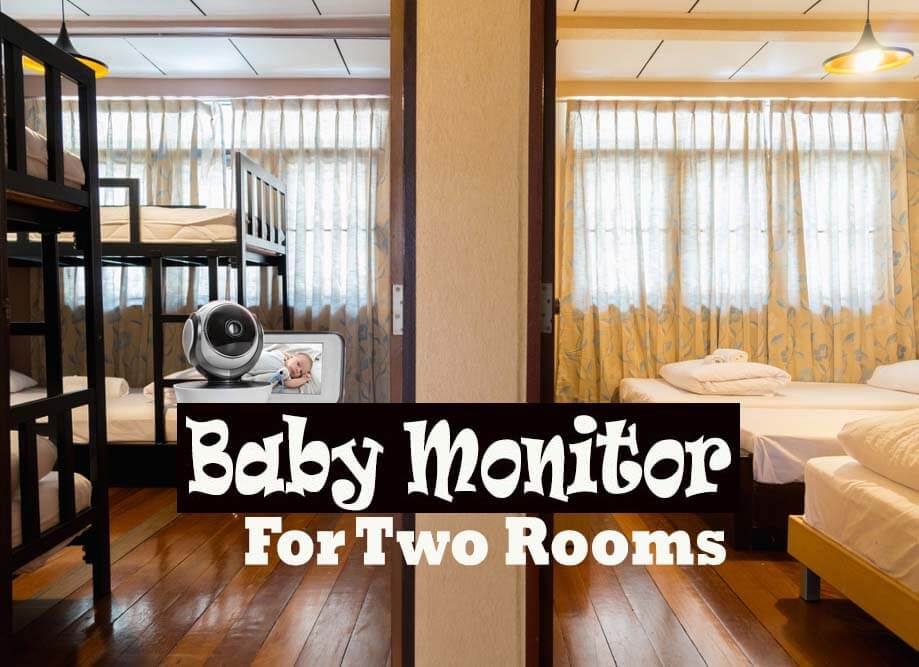 The best solution for parents who want to monitor two or more baby's room is to get a multiple-rooms baby monitor. Baby monitors vary in functions as well as configurations, and most of them are manufactured to suit just one room. However, with a growth in your family, a baby monitor for only one room won't be the right preference for you. Hence you need a Baby monitor for 2 Rooms. This will help you to monitor either your twins or toddlers at the same time without difficulties. The best Baby monitor for Two Rooms will depend on a myriad of factors which we will look at throughout the text.

Use 2 Baby Monitors For Two Rooms

A parent who has two babies sleeping in separate rooms can easily monitor his/her babies at the same time with the aid of two baby monitors. This gives you quiet time and peace of mind and if you already have one, don't get rid of it instead of add another one.

Have another baby monitor

By adding another baby monitor to an existing one, it becomes more comfortable now to monitor two babies in two rooms, and there will be no need of getting a multiple room baby monitor.

Another alternative is to have a baby monitor with two receivers that are so practical in giving you peace of mind to monitor a baby in a huge house or two babies in separate rooms as they sleep. When buying another baby monitor for your second baby, be sure that you have a good history of it by understanding its range signal, how efficient it operates and get it only if it satisfies you. You could choose another brand if the previous one weren't up to the task.

Advantages of having another baby monitor

One of the benefits of getting a second baby monitor in addition to the existing one is that you already know how the one you are using works, therefore, it gives you a comfortable time combining the same monitor to check your babies in two rooms.

Another advantage is that it is cheap to use a single room baby monitor compare to the multi-room monitor.

The last significant advantage of this is that by deciding to maintain the existing baby monitor and adding another one is an act of being eco-friendly. You also save money and time.

When using a second baby monitor, there are chances that you will experience interference between monitors and this should not be a big worry. An interference between monitors might typically arise for example when two separate audio monitors are turned on, and there will be feedback. Sometimes they tend to tap different rooms or neighbor's rooms and even radio station. This is possible and normal with audio monitors which operate within the same range of frequencies.

This issue, however, can be resolved by merely acquiring two separate models of baby monitors from distinct brands.

There is equally a chance of getting a model that allows you to incorporate another baby monitor unit and most of the monitors are capable of allowing an additional monitor, even up to 3, allowing you to monitor three extra rooms.

Use 1 Baby Monitor For Two Rooms

One Baby Monitor could act as a simple and more efficient option for a person who feels working with 2 Baby Monitor for 2 Rooms is cumbersome. It is secure operating one baby monitor for two or more rooms especially when you have extra tasks in the house to handle with several children by your side.

One baby monitor for two or multiple rooms gives you several options, and you can easily organize the house because when you have several babies in the house, you might experience a lot of clusters around.

You can quickly and conveniently monitor several rooms with the aid of a video baby monitor that has additional cameras incorporated. It is the easiest way to manage more than two babies in different rooms in the house at just one center, making you secure and comfortable. With extra cameras assisting you to monitor different rooms, it won't inconvenience you by paying several visits to separate rooms to observe your children unless it calls you to.

It is possible to get a video baby monitor with 2 cameras that incorporates up to 4 cameras that operate on a single receiver whereby you can monitor four children in 4 separate rooms at the same time. Two cameras can be installed in places which are more prominent so that the entire area is well controlled.

The monitoring system operates in a way that it rotates to cover views of the baby in the room approximately every 5 seconds and with a possibility of you scanning between the cameras for complete management.

With multiple cameras installed in different rooms, you can notice which room calls your attention without guessing, strategically. You can be able to wake up in the middle of the night and observe how each baby in each room is sleeping.

This is a baby monitor split screen that has dual color sound lights which allow you to recognize on the screen which room is explicitly the sound coming from. This feature again will enable you to monitor two separate rooms simultaneously. This means that you can position different units in separate rooms and track your child's movements from each corner of the house without moving the whole group every time.

Use Baby monitor for three rooms

Baby monitor for three rooms looks ideal; therefore for monitoring babies in multiple places. In some cases, you will find models of baby monitors that can accommodate additional child units under a single parent unit commonly known as the receiver base. Alternatively, you can establish a three separate baby monitor whereby you move around the entire house with a couple of receivers with you. This method, however, demands you limit the number of receivers you can attach on yourself so that you can conveniently manage the monitoring without many issues.

How to Choose Baby Monitor for Two Rooms

Most standard baby monitors consist of the base unit usually positioned around the bed of the baby with a receiver unit which the user can position it at any convenient place in the house where he/she can easily listen to whatever is happening in the rooms where the monitors are placed.

There are a myriad of factors to put in mind before deciding to choose a baby monitor for two or more rooms as discussed below;

It is preferred to adopt a baby monitor with best range especially for a home that is large with thick walls, and an extended range monitor will provide a good signal strength coverage. A long range of coverage should be approximately up to 1000 feet.

DECT Protection is a feature that technologically encodes and at the same time encrypts information direct from the transmitter unto the receiver. It also cuts out interference experienced from different electronics like microwaves and phones.

Mostly picture and video quality are reduced during the night or in dark places, and for a baby monitor to be considered well, it should have a high-quality night vision to give you accurate images and videos.

This feature is essential especially when it comes to having one in a fixed position while you carry around the other one. With this feature, any other person can be assigned to do the baby monitoring duty as well.

This is an extra-room baby monitor that has a split screen option that allows the user to monitor two rooms using two cameras at the same time. This is a feature that should be considered when getting the best baby monitor for two or multiple rooms. Some models have features that show each video being streamed in a cycle of 5 seconds saving you time from manually switching between separate rooms.

Another top feature is that you get notified of any alerts from the room by the monitor as it is displayed on the screen. Therefore, it should be sound activated and able to present relevant information.

Best baby monitors for two rooms are those that have a battery saving mode whereby it can sense any inactivity and switch itself in a sleep mode especially if they are battery powered. When the activity resumes, it should be able to detect and switch back to action as required.

These are lights found on some baby monitors that usually blink to alert you of anything happening in the room, and it often alerts you when there is particular noise like when doing the vacuuming. This is important because it keeps up to date with all happenings in the room.

A good baby monitor should be one that beats all odds and last longer especially managing to overcome the videos that usually burn through batteries. It is essential that a baby monitor should have a battery indicator that indicates the percentage used so that you prepare yourself on fixing another battery or charging it in any case.

With this feature on your baby monitor, you can just tilt the monitor to your desired angle, pan around the room with the baby monitor and even zoom it so that you can have a closer look at the babies when they are sleeping or just observe the whole place to be satisfied that all is up to date.

The best baby video monitor should be one that has a vast array of about 3 inches that works well primarily when you are working with the split screen baby monitors that have more than two cameras.

It isn't a hard task monitoring several rooms at the same time. The idea is you understand your house known precisely what kind of baby monitor suits your demands. Baby monitor for 2 rooms can be used all round, with one or two babies by positioning them in two places to monitor the activities.

When choosing the right baby monitor, you need to check out its durability, ease of use, affordable price and the overall performance. A perfect monitor has an interface that will enable you to check on how your baby is doing every time. Above all, it should be made out of materials that are meant to last long thus serving you for years. All this can be topped up with a creative and sharp look that will impress anyone with a baby. It is, however, your choice to pick the right Baby monitor for two or multiple Rooms that suits you at the end of the day. And this decision will depend on the above factors and pricing too.